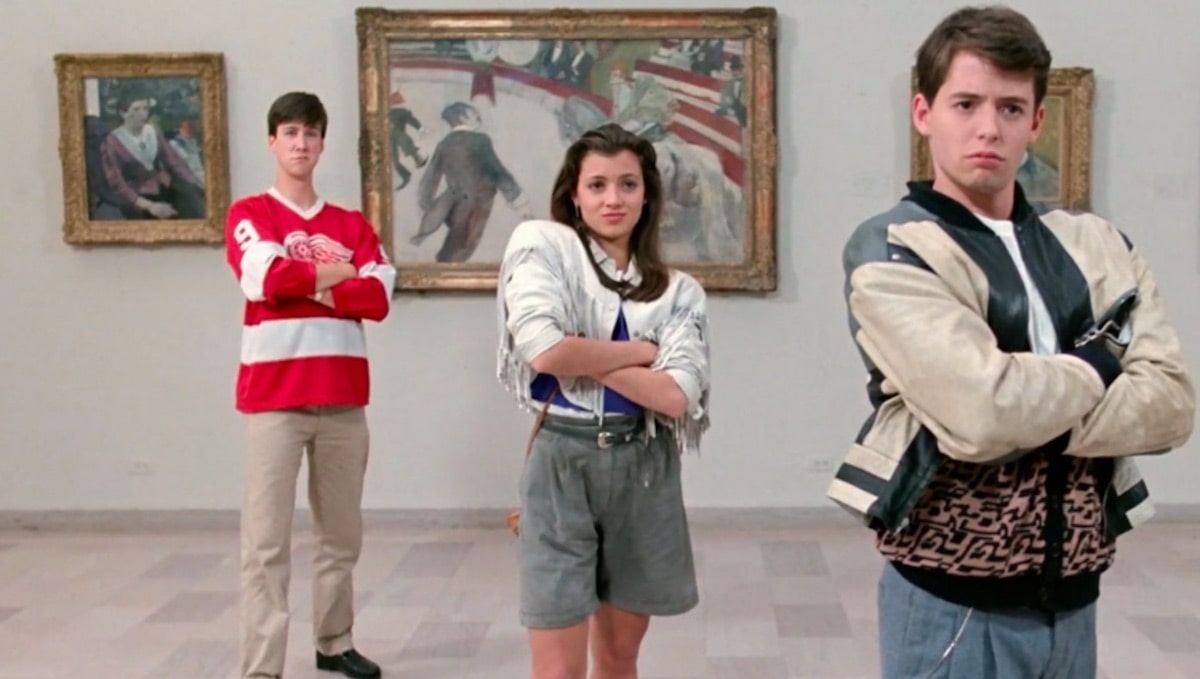 It’s been 35 years since a cheeky school boy named Ferris Bueller took the day off and spent the day running amok in Chicago.

The cult teen film Ferris Bueller’s Day Off was written, co-produced and directed by John Hughes. Hughes took less than a week to write the screenplay.

I can’t believe it’s been 35 years since this classic film first graced our screens. I absolutely loved this movie when it came out – I was 12 when it was released. What teenage girl didn’t want Sloane’s cool white leather boots and tasseled jacket?!

Here are some fun film facts you may not know about the movie.

The role of Cameron was originally offered to Emilio Estevez 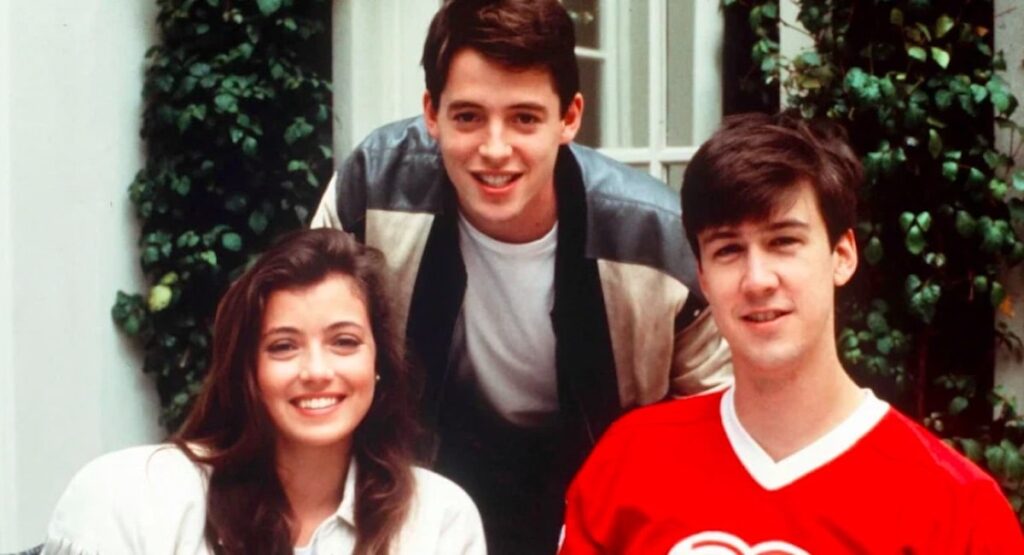 The role of Cameron Frye, played by Alan Ruck, was originally offered to actor Emilio Estevez. Ruck was aged 29 at the time of filming playing 17-year-old Cameron. He was concerned that he would not be able to pull off the age difference.

“I was worried that I’d be 10 years out of step, and I wouldn’t know anything about what was cool, what was hip, all that junk,” Ruck told The Chicago Tribune in 1986. “But when I was going to high school, I didn’t know any of that stuff then, either. So I just thought, well, hell—I’ll just be me. The character, he’s such a loner that he really wouldn’t give a damn about that stuff anyway. He’d feel guilty that he didn’t know it, but that’s it.” 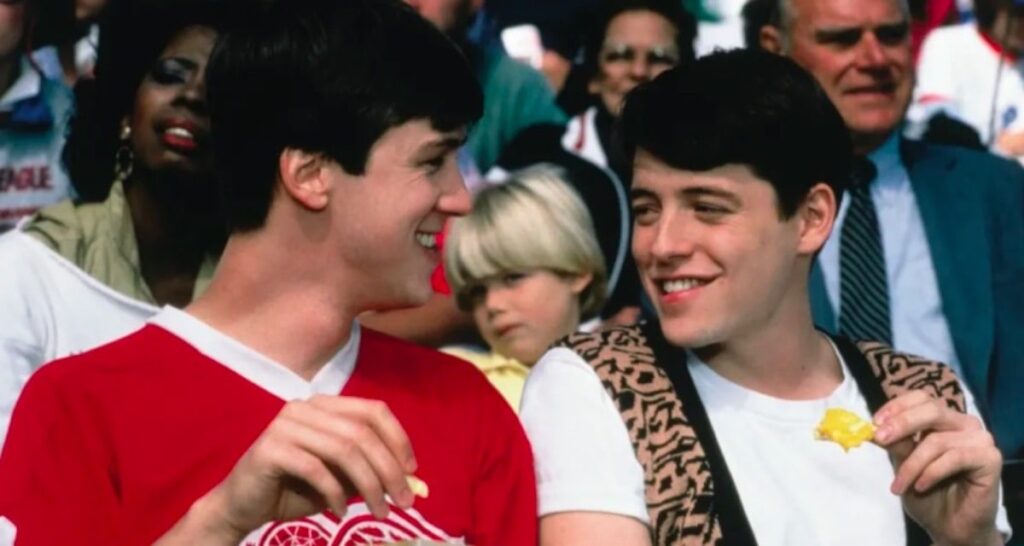 Alan Ruck, playing Cameron, and Matthew Broderick starring as Ferris Bueller had already acted together in a Broadway production of Biloxi Blues. Cameron’s ‘Mr Peterson’ voice was in fact an imitation and inside joke of the pair about their former director.

The modernist house where Cameron lived is a real home, located in Highland Park, Illinois. It is known as the ‘Ben Rose’ house, designed by architect A. James Speyer in 1954. The pavilion was added in 1974, designed by David Haid. It was once owned by photographer Ben Rose, who had a car collection in the pavilion.  In the DVD commentary for the film, Hughes said that they were able to use the house because the film’s producer Ned Tanen knew the owner because they were both Ferrari collectors.

The Ferrari was a remake

In the film, Ferris, Cameron and Sloane zip around in a red ‘1961 Ferrari 250 GT California’ owned by Cameron’s father. The inside shots of the car were of a real Ferrari, however all the external shots were reproductions. There were only 100 of the 1961 Ferrari 250 GT California’s ever made so it was far too valuable to plummet through a window (valued at the time of filming in 1986 at US$350,000)! The film crew had three replicas produced by Modena Design and Development who made the Modena Spyder California. 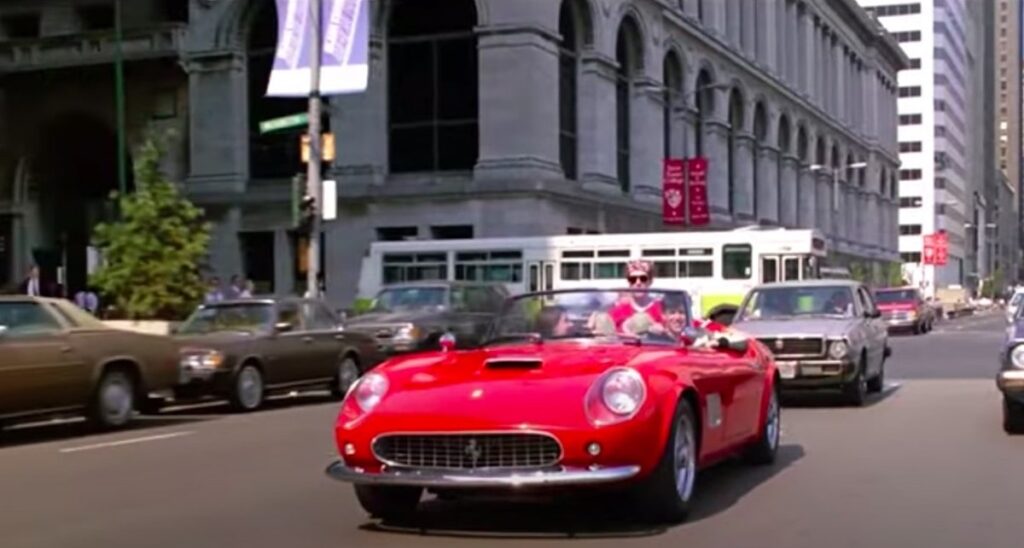 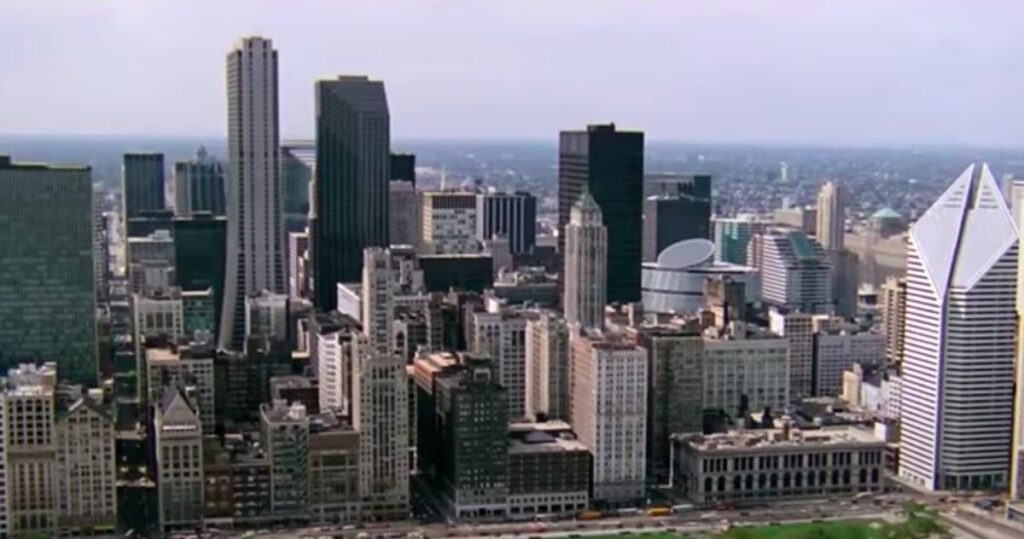 John Hughes was born and bred in Chicago and later said that “A lot of Ferris is sort of my love letter to the city,” he told the AMC movie blog.  He wanted to capture as much of the city as possible while shooting, including its architecture and landscapes. 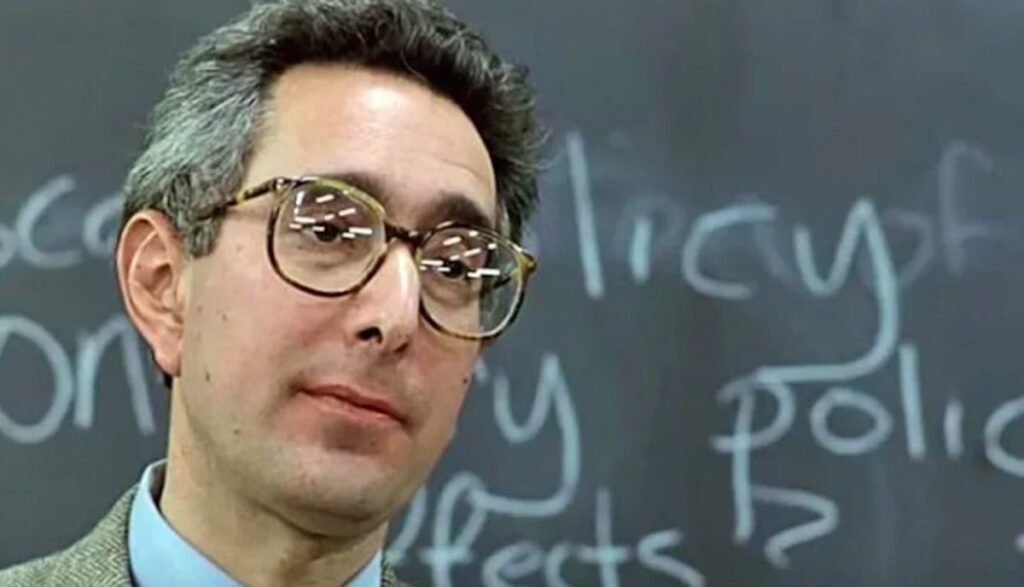 Sloane’s monotonous high school lecturer was played by Ben Stein. His dull lecture about economics was not originally in the script. The actor later said that he was lecturing off-camera to the acting extras playing the students who were all laughing hysterically. Director Hughes heard the laughter and asked him to do it on camera, improvising about something that he knew a lot about. “Everybody on the set applauded. I thought they were applauding because they had learned something about supply-side economics. But they were applauding because they thought I was boring. … it was the best day of my life”, Stein said to Showbiz Tonight on CNN in 2011 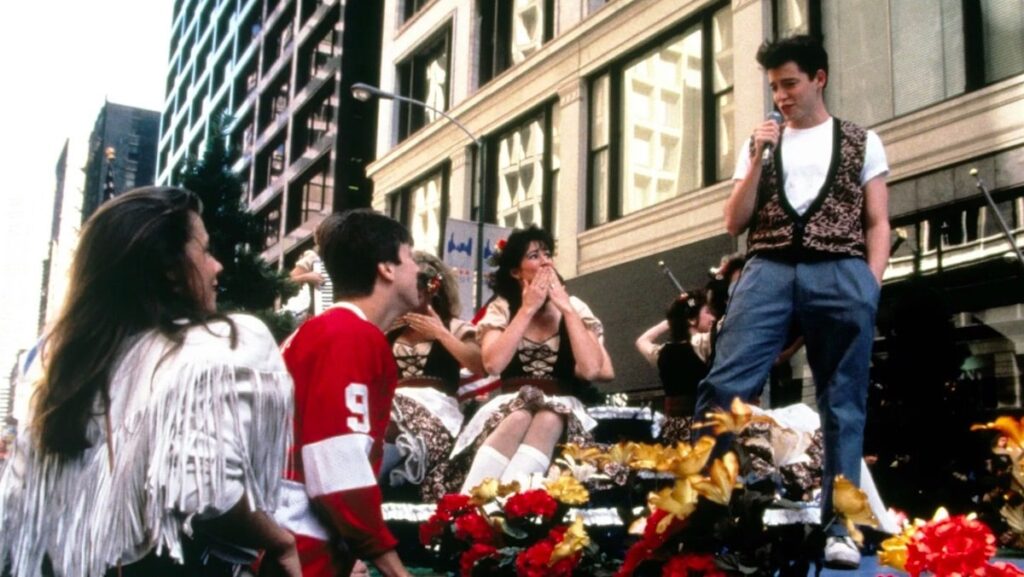 The classic parade scene where Ferris performs on a moving float took several days to film. Broderick had carefully prepared for the scenes which were tightly choreographed. However, due to a bad knee injury when filming the scenes of running through backyards, a lot of the dance moves had to be ditched, including several planned knee spins. The Danke Schoen track was still choreographed but for Twist & Shout, the sequence was spontaneous with Broderick later telling author Susannah Gora in 2010 “we were just making everything up”.

Hughes explains, “It just happened that this was an actual parade, which we put our float into—unbeknownst to anybody, all the people on the reviewing stand. Nobody knew what it was, including the governor,” Hughes says on the film’s DVD’s commentary. 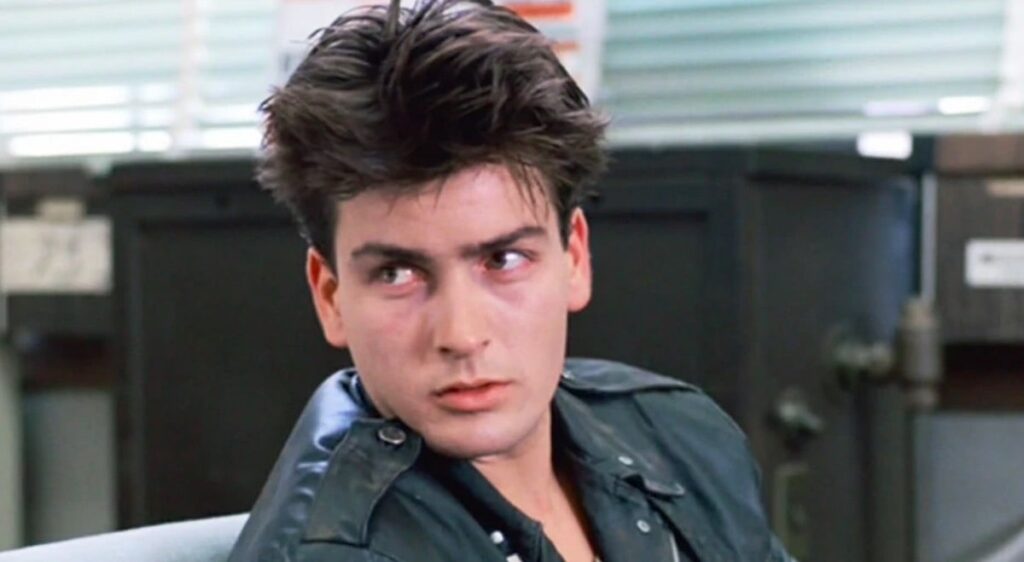 Legend has it that actor Charlie Sheen purposefully stayed awake for 48 hours to achieve the dishevelled and strung-out appearance when filming the scene at the police station where he meets Jeannie, played by Jennifer Grey.

Meeting on the set of the film, Matthew Broderick and Jennifer Grey started dating in secret and were engaged just before the movie’s US release in June 1986. In 1987, the couple were holidaying in Ireland just days before the release of Dirty Dancing when they were involved in a head on collision and accident that killed a mother and daughter driving in another car. The couple broke up in October 1988.

editor
As a child, I wrote short stories, poetry and daydreamed about visiting exotic destinations dressed like a 1960s film star. I was able to realise some of my dreams over my career spanning more than 20 years in Australian publishing, working as the editor of Luxury Travel magazine, Vacations & Travel magazine and as editor of several drinks magazines. As a freelance writer, I've scribed for The Australian newspaper, T Magazine Australia (The New York Times), Escape (The Daily Telegraph), Delicious, Travel + Leisure Asia, Wine Selector, Wine Companion, Holidays with Kids and more. I founded Vintage Travel Kat in 2020, inspired to share stories of vintage-related travel, fashion and lifestyle with a fellow vintage-vibe tribe.

Beautiful old doorway in the old town of Passau, G

There are just so many uncertainties right now in

Our handiwork this lockdown weekend… I decided

I watched a fabulous and insightful documentary la

Reminiscing about the golden age of overseas trave

It's been 35 years since Ferris, Cameron and Sloan

Do you love this outfit too?? ⁠⁠ ⁠⁠ In the

The Sydney I’m focusing on at the moment… and

When I bought these pants at @vinniesshops in Dick

May be time to drag out the vintage quoits again f

Christmas in July?! 🎄🤶🏻 Who says this lo