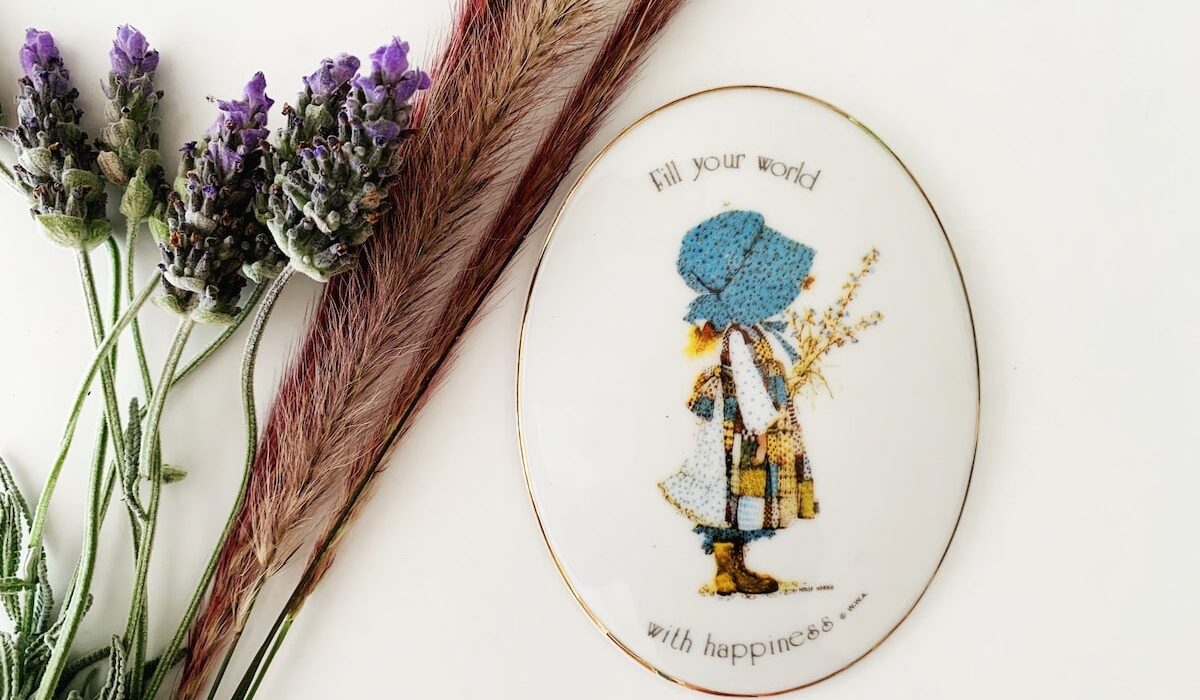 I have fond memories of the ethereal and innocent Hollie Hobbie character when I was growing up.

I love the story behind the character.

Holly Hobbie the character was created by illustrator and writer, Denise Holly Ulinskas born in Connecticut in 1944. In 1964 aged 20, she married Douglas Hobbie.

Denise ‘Holly’ Hobbie had started to create drawings of girls resembling prairie girl figures of the 19th century, wearing a large bonnets and patchwork dresses. By the late 1960s, her brother-in-law encouraged her to start selling her artworks to American Greetings in Cleveland, Ohio. The artwork was based on her own children and was originally a nameless character, known generically as ‘blue girl’ (wearing a large blue bonnet). 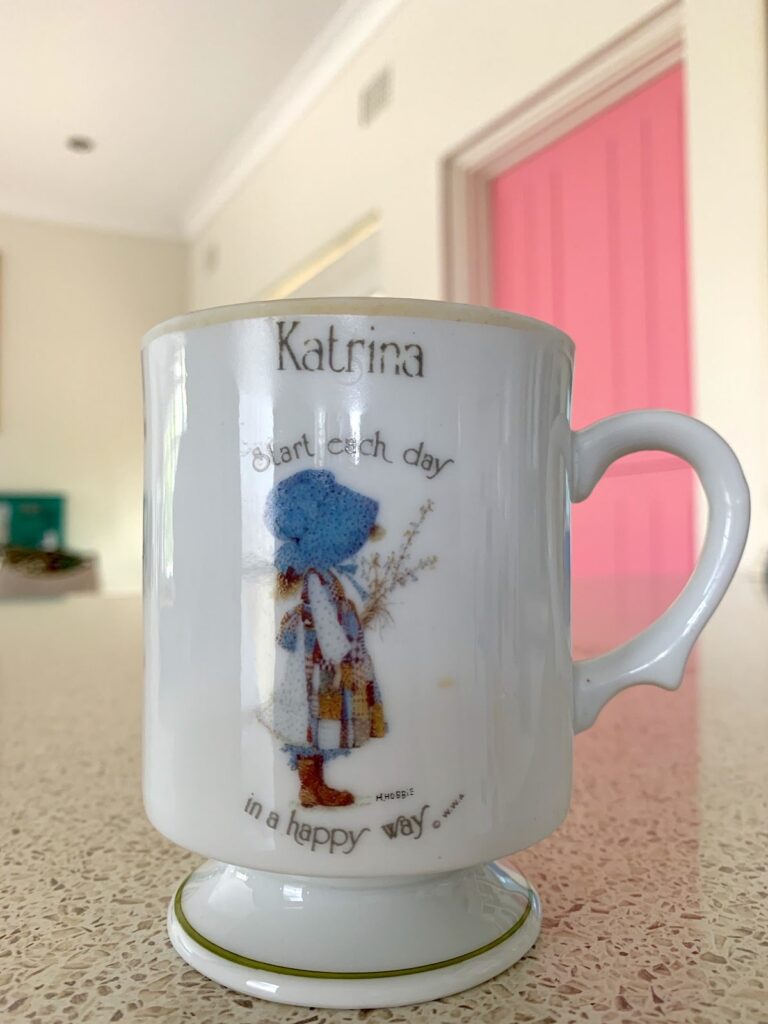 Holly worked with the Humorous Planning department at American Greetings under art director Rex Connors, who was responsible for launching ‘blue girl’ as the most identifiable of the Hobbie characters.

During that time (1973, 1974) Bob Childers, a veteran humorous concept artist and designer was also working at American Greetings. He insisted that there should be a doll of the character which fell on deaf ears. In his own time, he hand-stitched the first prototype. In 1974, Knickerbocker Toys licensed the Holly Hobbie character for a line of rag dolls, launched in 1975, and gradually adding more licensed products including fabrics, furniture, ceramics, games, and stationery

In 1976 came The Holly Hobbie Oven. In 1980 a novel by Richard Dubelman was created, titled The Adventures of Holly Hobbie.

A list of products followed including toy sewing machines, cake moulds, lunchboxes and bedding. Although a revived Holly Hobbie was attempted in the 1990s wearing denim jeans, it wasn’t a ‘patch’ on the original patchwork dress version of Holly Hobbie.

I personally had a Holly Hobbie mug as a child with my own name on it that I thought was the absolute ducks guts. I never quite worked my way up to the sewing machine.

She represents a wildflower-picking, nature-loving and faceless girl of a bygone era. Her innocence, mysterious appeal (with her face mostly concealed) and modesty are of timeless appeal.

Holly Hobbie items are currently enjoying a resurgence on the second-hand market which I like to think puts a smile on the face of Denise Holly Hobbie, her creator. 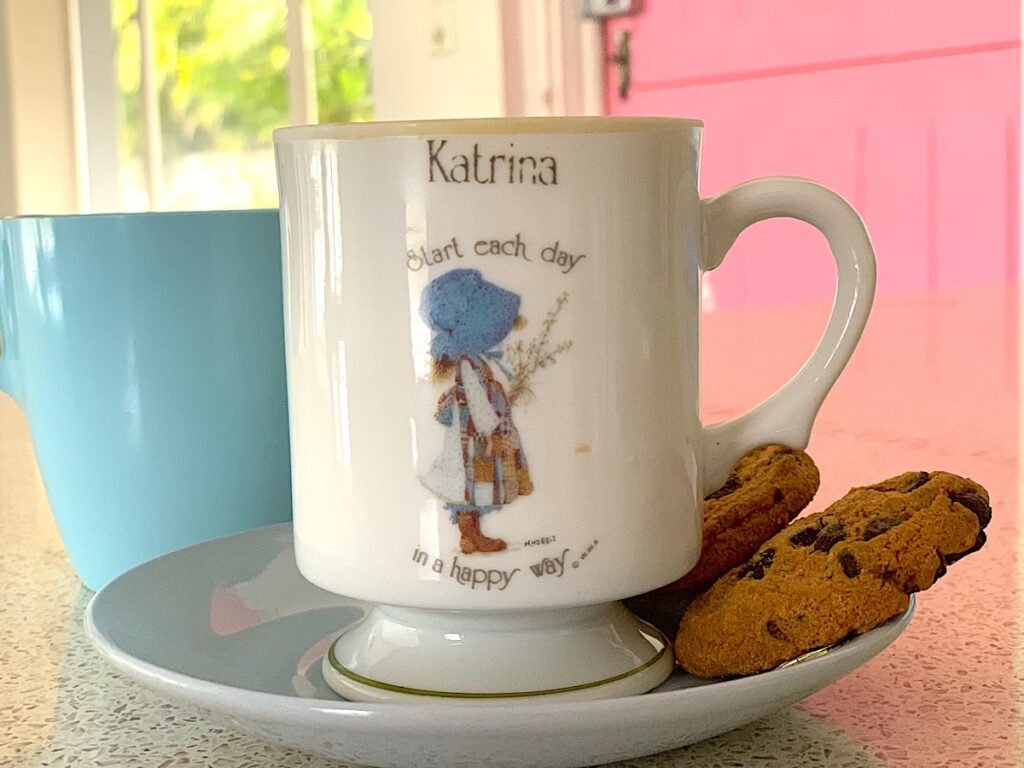 editor
As a child, I wrote short stories, poetry and daydreamed about visiting exotic destinations dressed like a 1960s film star. I was able to realise some of my dreams over my career spanning more than 20 years in Australian publishing, working as the editor of Luxury Travel magazine, Vacations & Travel magazine and as editor of several drinks magazines. As a freelance writer, I've scribed for The Australian newspaper, T Magazine Australia (The New York Times), Escape (The Daily Telegraph), Delicious, Travel + Leisure Asia, Wine Selector, Wine Companion, Holidays with Kids and more. I founded Vintage Travel Kat in 2020, inspired to share stories of vintage-related travel, fashion and lifestyle with a fellow vintage-vibe tribe.

Welcome to The Goodtime Hotel

Beautiful old doorway in the old town of Passau, G

There are just so many uncertainties right now in

Our handiwork this lockdown weekend… I decided

I watched a fabulous and insightful documentary la

Reminiscing about the golden age of overseas trave

It's been 35 years since Ferris, Cameron and Sloan

Do you love this outfit too?? ⁠⁠ ⁠⁠ In the

The Sydney I’m focusing on at the moment… and

When I bought these pants at @vinniesshops in Dick

May be time to drag out the vintage quoits again f

Christmas in July?! 🎄🤶🏻 Who says this lo